On the occasion of the 100th anniversary of the Battle of Vimy Ridge, Indus Media Foundation and the Sikh Heritage Museum of Canada are proud to release an art piece to re-interpret WW1 history through an inclusive lens. The illustration depicts the battle of Vimy Ridge in the spirit of “Brothers-in-Arms” in tribute to the victory at Vimy and the diversity of Canada today.

In September 1914, the Punjabi Lahore Division arrived in France as the first of the colonial forces to defend the Crown. In late 1915, Divisional Infantry embarked for Mesopotamia (Iraq) while the artillery remained in France. Initially attached to the 3rd Canadian Division, the Lahore Division’s artillery was subsequently attached to the 4th Canadian Division in April 1916. This artillery saw action supporting British troops at the Battle of the Somme and then at Vimy.

Confronted with a heavily defended position, which had resisted earlier British and French attacks, the Canadian assault began as one officer wrote with “the most wonderful artillery barrage ever known in the history of the world,”. The new art piece depicts Sikh artillerymen of the Lahore Division’s Ammunition Columns in action with the 4th Canadian Division on that fateful Easter Monday morning in 1917.

Troops from all four Canadian Divisions then advanced side by side for the first time to storm the ridge, capturing it at the cost of more than 10,000 killed and wounded. Many would consider the victory to represent a rite of passage in the Nation’s history; with the courage and sacrifice of the Canadian troops at Vimy came a new assertion of Nationhood.

“When we remember the valour and sacrifice required to achieve this victory we should also celebrate the ties that bound men from different races & religions to unite under one flag in the common cause of freedom”, said Steven Purewal, Managing Director of Indus Media Foundation. Over 135,000 of the Crown’s British Indian Army troops fought alongside Canadian troops on the Western Front, in Battles that included at 2nd Ypres & St Julian, Festubert, The Somme and Vimy.

“Sikhs fought with valour and distinction in WW1 for many countries including British India, Britain, Australia, New Zealand and Canada. At a time when Canada’s military is led by a Sikh, the Hon. Harjit Singh Sajjan, Minister of Defence, the art piece represents a particularly poignant rendition of the momentous battle at Vimy “, noted Pardeep Singh Nagra, Executive Director of the Sikh Heritage Museum of Canada. 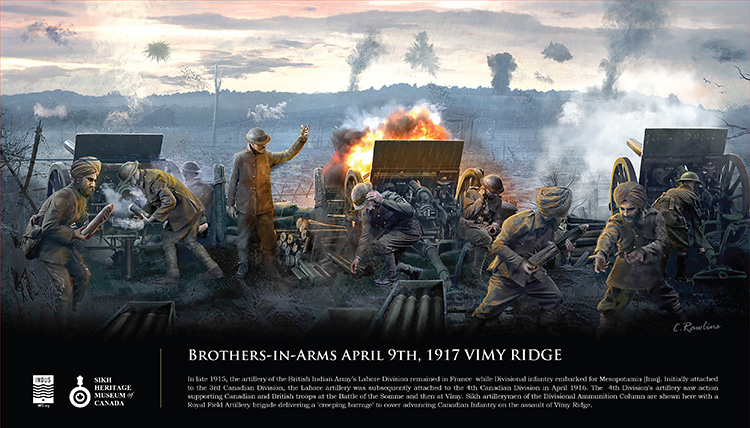