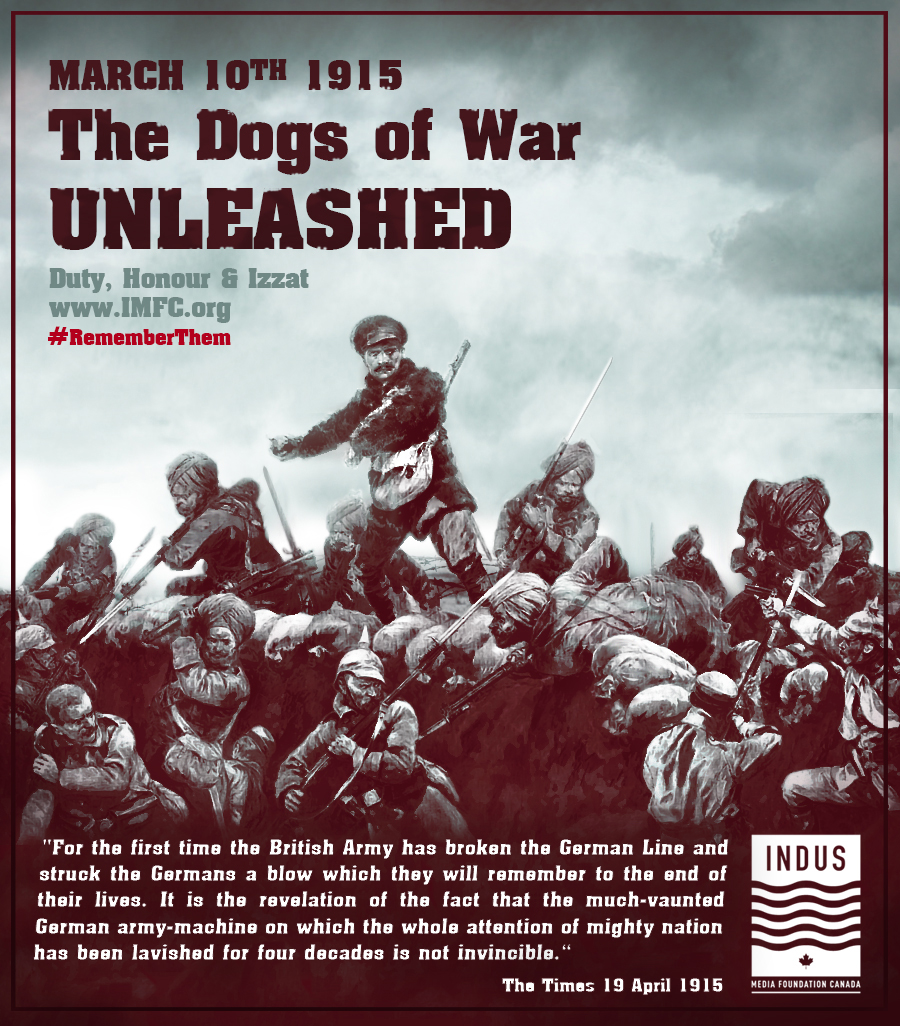 A WW1 Death Wish – The Cost of Punjabi Honour

The storm that had loomed large on the horizon broke on March 10th.

100 years ago today the battle of Neuve Chapelle first tore open the Western Front. The Lahore Division had landed in France 6 months in September 1914 , its ranks on a mission to demonstrate the fighting spirit of the Indian soldier, took part in the battle in which the Indian Corp provided 1/2 of the offensive force . The battle was the first successful assault of the British forces and it was a magnificent display of Indian valour, and gallantry .

We continue from our last post ” The Calm before the Storm”, with extracts from the 47th Sikhs War Record >>

March 9th
The Corps Commander visited us, addressed British and Indian Officers to the effect that he had recommended that after the coming battle the Indian Troops should return to the East. His reasons were that we had been brought to France at a time when the need was urgent and other trained troops were not available; that now a regular supply of British Troops was becoming available; that our disabilities as regards reinforcements, etc., made it in his opinion advisable to employ us elsewhere. He emphasized that we had fully upheld the best traditions of the Indian Army and rendered invaluable service, and that he was confident that in the coming battle we should be entirely successful. Turning after his address to the Officers he asked them to give him their views on what he had said. As usual they were loath to talk till Subedar Harnam Singh, a splendid specimen of a Sikh Officer, on being pressed to give his opinion said : “Well, Sahib, as I am asked to speak I will say that we came here to defeat the King’s enemies. They are not defeated we should not leave the country till they are.”

With the coming of spring, British command had decided to end the stalemate of the winter entrenchment by taking the offensive first. Plans had been painstakingly prepared, with maps provided by the Royal Flying Corps, to take the village of Neuve Chapelle, which had been in German hands since October 1914. Then, a rush would be made on to the strategic Aubers Ridge behind the village.

On March 10th, the plans were put into effect. The British and Indian Corp attack started gloriously , with over 450 guns making a 35 minute “hurricane bombardment” shattering German barb wire , trenches and breastworks leaving the Germans stunned and defenceless. Taking advantage of the sole occasion the Indian Corp were adequately supported by artillery, the Indians rushed forward and seized Neuve Chapelle village in less than 2 hours, taking 200 German prisoners and five machine guns. This victory was short lived; supply and communication problems stalled the offensive on the next sector of Auber’s Ridge – behind the lines British command halted the attack for 24 hours. While troops in the field pleaded to be allowed to advance, the Germans rushed reinforcements forward. When the attack was renewed next day, a failure in getting the British guns moved in time resulted in British and Indian troops advancing, without covering fire this time, only to be decimated by the defending Germans. The stage was now set for a counter attack and men of the 47th Sikhs would seize the day paying the ultimate price for loyalty and upholding the honour ‘Izzat’ of India on a global stage.

The orders were for an attack by the Lahore Division. The Jullunder Brigade was to advance on the Left of the Division keeping touch with 8th Division on its left and with the Sirhind Brigade on its right. The advance was timed for 11 a.m. that of the 8th Division being half an hour earlier to enable it to come up into line on our left. At 10.55 a.m. the attack was postponed to 1 p.m. to allow of adequate Artillery preparation.

By this time the enemy was forewarned and had brought up reinforcements, both men and guns, a heavy fire was opened on our positions round NEUVE CHAPELLE.

At noon the bombardment on the 8th Division front began, but by 1 p.m. their attack had only progressed about 100 yards and they were still a long way behind our left flank. Shortly before the bombardment on our front began about 150 Germans came over in a body and surrendered; they were a miserable looking lot of men appeared to be dazed by shell fire.

At 12.30 p.m. our guns opened on our objective, BOIS DU BIEZ. Our Artillery fire was not nearly so intense as on the first day of the Battle, the shortage of ammunition was already being felt.

We advanced at 1 p.m., from left to right Nos. 2 and 1 Companies in first line, No. 3 in second line and No. 4 Company and the Machine Gun Section in reserve. Shortly after the advance began Captain Combe was wounded (2nd time) and the command passed to Captain Hogge, the latter was soon wounded in his turn and Captain Talbot, himself slightly wounded took command.

The advance met with an exceedingly heavy fire by 2.30 p.m. had only progressed some 800 yards, as far as the former German support trenches which had been held all day by picquets of the 3rd Gurkhas.

Subedar Harman Singh was killed here. He had been conspicuous for his bravery throughout the campaign and had been awarded the Indian Order of Merit for bravery at Festubert on 20th December, an action in which his only son, a sepoy in the Regiment, had been killed. Here fell also Captain A. M. Brown, shot through the heart. A former Adjutant, splendid soldier, keen shikari athlete, he had rejoined the Regiment from the Staff College on mobilization. He had been decorated for gallantry on 28th October, 1914, wounded on 21st December, 1914 and again a few hours previous to his death. A most popular efficient Officer was lost to the Regiment and a very promising career cut short by death. Captain Storey also was wounded, and casualties in the ranks were very heavy. The attack oould advance no further, a terrific enfilading Machine Gun fire from the left barred all progress. This came more especially from a redoubt on the N.W. corner of BOIS DU BIEZ. In fact the left of our Division was in the air as the 8th Division had been unable to come up according to plan.

During the advance a wounded man was seen to be lying in a most exposed position. No. 514 Havildar Gajjan Singh and No. 2270 Sepoy Rur Singh volunteered to try bring him in. The Havildar was at once severely wounded but Rur Singh managed to bring him back to cover then again went out for the wounded Sepoy but was unable to move him. Lieutenant Allardyce then went out and with Rur Singh succeeded in getting the man under cover. Havildar Gajjan Singh and Sepoy Rur Singh were awarded the Indian Order of Merit, 2nd Class, for their gallant behaviour.

The gallantry of the stretcher bearers in attending to the wounded under heavy fire was especially noticeable. Nos. 1759 Sepoy Puran Singh and 852 Ishar Singh were recommended for devotion to duty in this respect.

A counter attack by dense masses of Germans led by Officers on horseback was attempted about 6.15 p.m. It was repelled with great slaughter, the men were delighted with the unusually fine targets offered by dense masses of the enemy in close order.

The Sirhind Brigade on our right had met with no better success than we had. A further attack by the 8th Division on our left timed for 5 p.m. did not develop.

The attack had now come to a standstill and the positions reached were held and consolidated during the night. At 10 p.m. the Headquarters 1st Army ordered the suspension of further operations and the Battle came to an end.

Neuve Chapelle was the Indian Corps largest action on the Western front , forming over 1/2 the British attacking force, about 24,000 Indian infantry were engaged and during the three days of the battle, casualties numbered 133 British officers, 60 Indian officers, 1912 British and 2128 Indian soldiers. The total casualties of the British & Indian forces were 12,811 – the toll they took on Germany was 18,000 killed or wounded. By the standards of WWI, Neuve Chapelle was a success, the Indian Army had demonstrated they could take on Germany and come out on top; an attack is expected to produce more casualties amongst the attackers than the defender. It was an important victory that cost 20% of the Indian Corp – soldiers that time forgot.

The Commander-in-Chief, Sir John French, circulated the following
message: —
“I have cabled to Viceroy India — begins I am glad to be able to inform Your Excellency that the Indian troops fought with great gallantry and marked success in the capture of NEUVE CHAPELLE and subsequent fighting. The fighting was very severe, and the losses heavy, but nothing daunted them. Their tenacity, courage, and endurance were admirable — ends.”

In addition to those previously mentioned, amongst British Officers Captains Abbey and Cormack (1.M.S.) had been slightly wounded but remained on duty, and amongst Indian Officers were, killed: Jemadars Chur Singh and Jiwan Singh, and wounded: Jemadar Ishar Singh, Hira Singh, Mehar Singh, Dharan Singh, Indar Singh, and Waryam Singh. The casualties of the Regiment during the three days of the Battle were; British Officers-1 killed, 9 wounded; Indian Officers — 3 killed, 8 wounded; I.O.R. – 46 killed 248 wounded.

Captains Combe and Ralston received the Military Cross for their conduct on this and other occasions. Captain Cormack I.M.S. received a similar award for his devotion to duty in attending to the wounded under extremely heavy fire.

By 1915 the British people, having realised there would be no early end to the conflict needed more than flag waving enthusiasm to redouble their efforts- the victory at Neuve Chapellle, in French Flanders, reignited the nation’s resolve to win the war. No doubt, the gallantry of the Indians had also inspired other son’s of empire now entering the front lines; the Canadians, had just arrived from their training camps in Britain. During the battle of Neuve Chapelle they were assigned a diversionary role, to draw German attention away from the main advance as their first action on the Western Front. The dash and the determination displayed by the King’s men from India would no doubt also inspire them in their impending moment of reckoning.

Check our latest post:
The Great War, with all its tragedies, has many stories of valour and loyalty. Military camaraderie runs deep and spans a century following the heroic efforts of a Lieutenant to rescue an injured comrade from no-man’s land. Read the story here: www.facebook.com/IndusMediaFoundation/posts/677106895751434