IMFC | The Legend of the Punjabis in Flanders Field Christmas 1914 – Lest We Forget
5146
post-template-default,single,single-post,postid-5146,single-format-standard,ajax_updown_fade,page_not_loaded 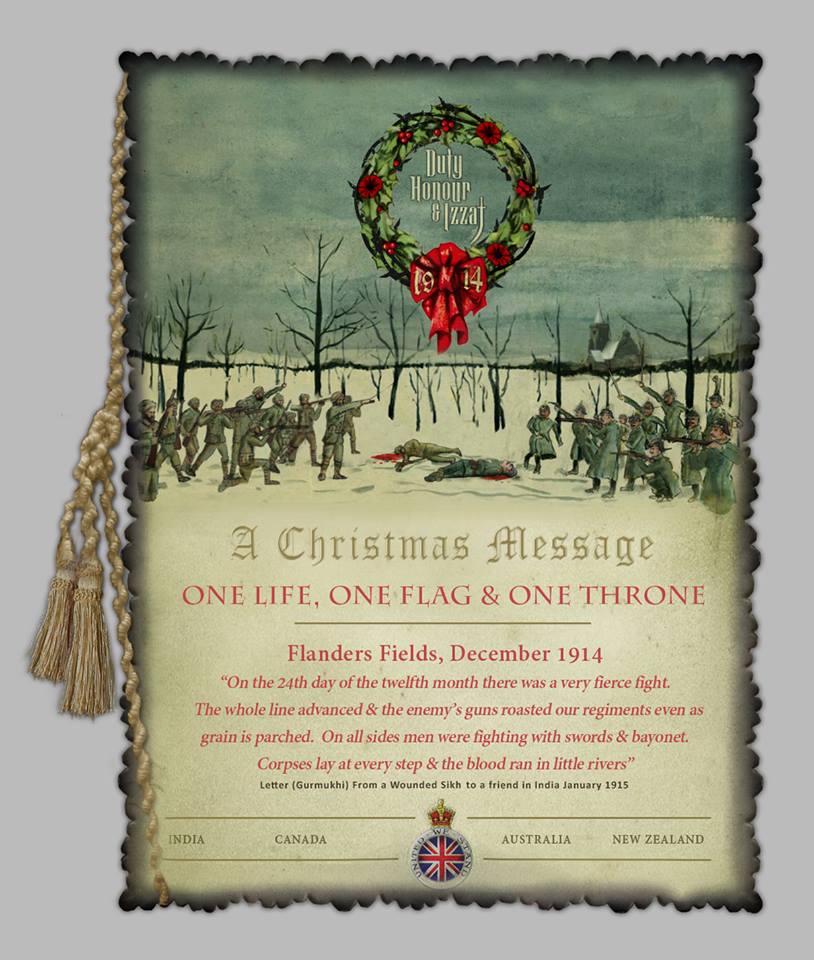 “The war is heavy and hard. There is little rifle fire, it is a battle of cannons & machine guns. When there is a battle the guns fire hard. The machine guns go on motor cars. The German guns are very cruel. But now English guns are being used which are far stronger & heavier than those & much crueler. The artillery fire upon our trenches is especially severe. A lucky man escapes & a very fortunate man will meet his brothers again. Countless cannon & machine guns are firing. Think of this carefully & understand what I say. In the trench the snow rises from the feet to the neck & the feet & hand are frost-bitten. Everyone will be distressed by the snow & the snow is most distressing. It rains & snows day & night. The sun is never seen..”
( Censor Report Ref: IOR/L/MIL/5/825/1 British Library)

The lines above are an excerpt from a Gurmukhi letter by a Sikh written to a friend in India in January 1915, it recounts his experience on the Western Front (to see the complete letter please visit www.imfc.org). As the first battle of Ypres drew to a close on 22nd November 1914, the full horror of a new kind of warfare began to sink in amongst the Indians – warfare that was waged by the cold ruthless steel of artillery and machine gun would soon shred any notions chivalry in war as romanticised in the Victorian era just a scant few years earlier.

Thus it was on the occasion of the first Christmas of the Great War, a moment was seized in the spirit of the season to call a momentary truce as a tribute to the spirit of humanity. British & German soldiers it was said, engaged in a friendly football match all the while sharing rations. Although such a truce did take place on Christmas day 1914, albeit momentarily, the tale of the football game has been disputed going on to gain somewhat of mythic status. Meanwhile, there are some undeniably true tales of that winter and that have gone untold, with nothing to even engender the whisper of a myth, these stories have been lost – these were the stories of the Indian soldiers. If the story of the football match, as recently popularised in a commercial by a UK grocery chain ( (Sainsburys), were about the spirit of sharing then the lost story of the Punjabis was about the spirit of giving – thousands of Indian soldiers gave their lives in the defence of western liberal values that are the foundation of the democracies and freedoms we all enjoy today in Canada. That they gave their lives while many able-bodied Europeans had yet to take up arms to defend their own lands is even more remarkable – and that they fought stoically in the name of duty, honour and Izzat, outgunned and outmanned is the very stuff of myths and legends.

General Willcocks, commander of the Indian Corp on the Western Front would later write in a popular 1917 news magazine, that “the Lahore Division hung on during the devastating winter of of 1914-15.. short of guns and ammunition, not provided with trench mortars, grenades, and a hundred other engines of war now deemed absolutely essential to success… it must be borne in mind that the Indians had come to the help of the Empire from their far-away homes come at the call of their Sovereign at a time when millions of our own people in this island were still taking no part in the battle line, before the compulsory call had come to them, before they had at long-last learned that it is the duty of every man to fight for his country”. The Sikhs, Jats, Dogras, Pathans, Punjabi Mohomedans and others, all took their full share in the arduous duties of the trenches and the many fierce fights that took place for twelve long months; and those who know what that share was, especially during the winter days of 1914-15, can be but of one opinion that the Indian soldiers are due a great debt of gratitude”

This Christmas, 100 years later, let us now in kind remembrance of these brave soldiers, echo the whispered words of General Willcocks, by sharing this post and ecard with all your friends and the community in which you live.

Merry Christmas to you and yours,
Steven Purewal & the IMFC team